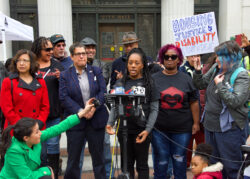 If education and housing security are factors affecting health, the increasing numbers of families facing homelessness are experiencing double jeopardy.

A brief reference in a Detroit Free Press article on dropping attendance rates in Michigan schools should have raised alarm among readers. Attendance in Michigan schools has dropped dramatically since the onset of the coronavirus pandemic. “Economically-disadvantaged students” experienced an 88 percent absenteeism, while “students facing homelessness” experienced a 79.8 percent homelessness rate. That’s a remarkable statement on the impact of poverty in this one, compounded health indicator.

If you don’t have secure housing, it’s exceedingly difficult to attend school, much less study well. If you don’t attend school, particularly during the critical development years, you will face the likelihood of poor health in the future.

Sen. Hollier emphasized that there is an affordable housing crisis at every level of society, exacerbating the problems for people living in poverty. He explained that when there is a scarcity of housing for affluent populations, they take housing that may have been available for lower economic levels. And while gentrification in Detroit cooled off during the initial years of the pandemic, it remains a force pushing low-income people out of “truly affordable” rental properties.

The concept of affordability has been contested by housing advocates in Detroit for many years. Affordability is computed by a formula known as AMI or average medium income. This involves populations living in Livonia and Warren, which have higher incomes than Detroiters. Council President Stallworth announced that her office is developing an ordinance that would require developers to use a Detroit-based formula for AMI, thereby lowering rents considered “affordable.”

Haywood Edwards, director of the Michigan State Housing Development Authority’s Office of Equity and Engagement presented the state’s housing development plan in the context of the philosophy of administering housing policy through an equitable lens.

Housing insecurity, particularly for the growing population of extremely young and old, continues to worsen the long-term health prospects for people made vulnerable through poverty.