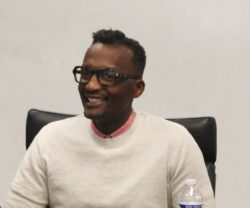 Hamissi Mamba, Owner and Operator of Baobab Fare Shared his Story on the Power of Faith, Sacrifice, and Triumph

Another special guest speaker who graced this month’s Schweitzer meeting was Hamissi Mamba who, with his wife Nadia, owns and operates the buzzy new restaurant, Baobab Fare in the booming new area of New Center Detroit.

The Schweitzer Fellows sat quietly and intently as Hamissi recounted his story of becoming the first owner of a restaurant with a storefront in the city of Detroit that specialized in African cuisine. His recount went from harrowing to gratifying and back again as he spoke about the civil unrest of his hometown of Burundi and being separated from his wife and twin baby girls as result of the unrest, to reuniting with his family here in the US and the triumphant success of opening Baobab Fare.

Mamba spoke about the irony of coming from a place where there was a problem of having a  lack of food only to find himself here where there was ample food, but oddly a lack of access. The community health issue of having access to quality food is something that took Mamba a while to fully grasp; however, it is now something that he and his wife are invested in helping to fix not only through their commitment to and belief in preparing quality whole food via their restaurant, but also by opening a full commercial kitchen in a nearby school in Detroit. Their goal is to create spaces for other cooks and food entrepreneurs to have opportunity to make quality foods that the community will consume.

Another important reason behind the Mamba’s decision had to do with their concern that a school (where many children get the bulk of their food intake from) didn’t have a kitchen and was, in fact, ordering frozen food that was thawed out to serve to the children—another reality that seemed to boggle his mind.

In any event the Fellows, enjoyed African fare, hand delivered by Hamissi Mamba and prepared with intention and great care by Nadia Mamba.